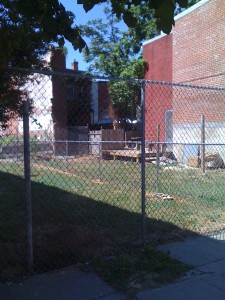 It has been a streetcar lovefest this week in the Council, but concerns remain with a power substation proposed for 1215 Wylie Street, NE, a District-owned property in the middle of a residential block.  At a community meeting April 20th, those impacted raised questions regarding safety, home values, aesthetics, maintenance, and alternate locations.  On June 29th, DDOT presented a new design and attempted to address those questions to everyone’s satisfaction.

The basic facts regarding streetcar power are thus: in order to maintain a consistent stream of power throughout the 2.2 mile H St./Benning line, three power substations, evenly spaced along the route, will each receive 1 megawatt of A/C power from Pepco and convert it to the 750 volts of D/C power the trolleys require.  Those substations will then feed the wires that “tap” the overhead cable every few hundred feet.  The overhead cable will be relatively small (I’ve heard the width of a pencil) — the project has been designed for the larger cable to run underground.  That underground cable will also be fed from the substations, via underground ducts.  Optimally, a substation is located at ground level, rather than underground or on top of a structure, so that it can be easily accessed by maintenance vehicles and equipment.  And we have now reached the end of my transportation engineering knowledge.

Tuesday night, DDOT presented a new rendering showing the substation masked behind a 2-story brick shell designed to look architecturally similar to other homes on the block, though slightly wider.  As designed, it can be accessed through a traditional front door (though there will be a wall and another door before the actual equipment can be accessed) and via a sliding or swinging gate in the rear.  This is a change from the initial rendering of a squat, brick rectangle built to enclose the pre-fab steel shell around the electrical equipment.

Additionally, there was discussion about noise from the air conditioning unit, which the engineering firm said would be similar to a residential system.  Residents asked about waste water and runoff into the alley – it appears there’s a chronic problem with water in the alley.  The project’s engineer said any runoff would be limited to condensation from the air conditioner. 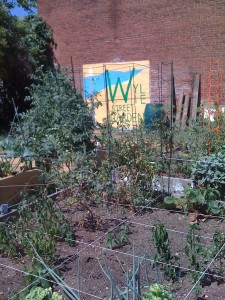 These comparatively smaller issues masked the bigger question that eventually emerged:  Why Wylie Street at all?  Kelvin Robinson, Chair of ANC 6A and Ward 6 Council candidate, attended the meeting and had this to say, “Like residents on Wylie, I too am concerned that not enough consideration has been given to alternate locations for placement of the streetcar power substation.”

A substation needs to go somewhere in the vicinity of 12th/13th streets, but Wylie Street is not the city’s only option.  Also nearby is the parcel at the corner of 13th & H, home to the former R.L. Christian Library kiosk, and the parking lot adjacent to Auto Zone.  It was unclear to me if the parking lot option was seriously considered, and DDOT’s response to the library kiosk site was that it is in early development stages and doesn’t appear it would accommodate the substation.  However, neighbors are concerned that their one-block street, a block off of H but a quiet retreat compared to the bustle of the commercial corridor, will be negatively impacted by the addition of the substation.

Robinson continued, “While I greatly appreciate DDOTs efforts to offer a design that would result in a facility that attempts to maintain the visual character of the neighborhood, such efforts do not address the underlying issues of impact on property values and safety.  We will continue to push for alternatives until all have been completely explored.”

The other two power substations will be at opposite ends of the line — one at 26th and Benning, next to the library kiosk; and the other on H Street, under the bridge between 2nd and 3rd.  DDOT’s presentation from the April meeting can be seen here.  The rendering on Slide 12 shows the old enclosure design.