The Washington Brewery Company existed from 1890 until 1917 on the Square bounded by 4th, 5th, E, and F Streets NE. During that time, it supplied DC with beer in bottles graced with George Washington’s picture. After it was torn down in the 1920’s, it was replaced with Stuart Junior High School, today Stuart-Hobson Middle School.

Nothing remains of the brewery but a few bottles that are avidly sought by collectors of Washingtoniana, historic beer bottles, and locals intrigued by the history of this corner of Capitol Hill.

A brewery of some sort had operated from as early as 1858, where the city directory listed Humphrey & Juenemann as having their place of business at “4th East Corner E North” ie, the corner of 4th and E Streets NE. Eventually, George Juenemann took over entirely, and he and his heirs ran it until 1886, when his wife and two sons sold out to Albert Carry, of Cincinnati. Carry paid the princely sum of $95,000 for a brewery that was “famous, not only in this District, but throughout the country.” (at least according to the Washington Post of October 15, 1886)

Carry did not own the brewery for long, and by May 1889, he was fighting off rumors that he had sold the brewery to a British consortium.

Instead, the brewery was sold about a year later to a group of investors from New York as Carry insisted that “Congress would not allow me to sell the square to Englishmen.” (Washington Post August 13, 1889) Nonetheless, almost immediately after the deal went through, the New Yorkers turned out to be a front for a British consortium. The new owners, who paid $400,000 for the property, renamed the brewery the Washington Brewery Company, and began selling their beer in bottles with a picture of George Washington on it. 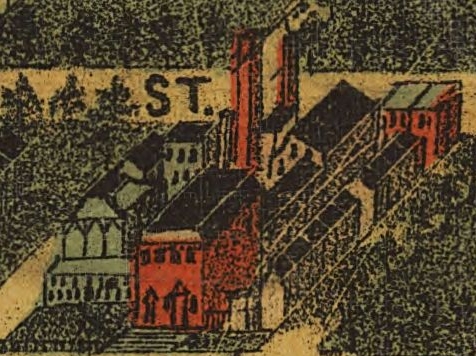 One of the reasons that the new owners were keen on owning a brewery in the nation’s capital was that they were sure that the wave of prohibition sweeping the nation would never be applied in such a way as to deprive the good representatives of the country of their hard-earned drinks, as the representatives themselves were in charge of the laws of the District.

Unfortunately for them, this turned out not to be the case, and in 1917, over two years before it became the law of the land, the Sheppard act was passed, prohibiting alcohol in the District of Columbia. The Washington Brewery Company did not last much longer.

There was, however, one brief coda: A brewpub of the same name was opened on Wisconsin Avenue in Georgetown in 1997. Sadly, even without the threat of prohibition, by 2005 it had closed again.