Hine UPDATE: TWF Exits Stage Left, but Curtain on Shakespeare not Down Yet 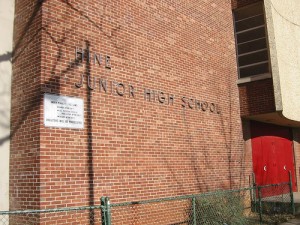 Old Hine Jr. HS site. Uploaded to Flickr by Bill on Capitol Hill from his photostream

The less than year-old project to develop Hine  Jr. High School may seem thick in the new decade’s summer doldrums, but a lot is happening behind the scenes even as demolition and groundbreaking remains a couple of years away.  On the calendar next: The plan goes to City Council  July 13th, sent over for approval from the Deputy Mayor’s office for Planning and Economic Development, so time to revisit where this project is! I tell you, it is probably easier to write about state insurance regulation vagaries and Olympic Village security.

But, how to break this to the Hill’s innocent ears, ahem — there is one group we won’t have as a new neighbor and a current neighbor nonprofit who may not be the expected beloved tenant for the cavernous space planned for it.

The youth-in-need mentoring support nonprofit, the Tiger Woods Foundation (TWF), pulled out of negotiations due to  internal issues, and Stanton-EastBanc replaced the TWF space with additional residential housing, according to the Stanton-EastBanc team, with whom I met and spoke late last week. Perhaps that is no surprise  given the tabloidization of Tiger Woods’s career since TWF first started talking to developers.

And not to harass the Bard, who will have a square named after him under the plan, but To Be or Not to Be, that is the Question.

The Shakespeare Theater Company, whose offices and rehearsal space are now housed at 516 8th Street SE, is having some economic  issues with providing or committing financing, although Stanton-EastBanc is trying to work with them so they  hopefully will be able to lease the space. Nonprofits have been hit by the recession, and my understanding is that there are some  big financial gaps to close before Shakespeare can commit to Stanton-EastBanc. Kitty Kaupp and Ken Golding of Stanton Development Corporation discussed the situation, but a representative of  Shakespeare was not available by publishing time.

It’s a different building if they are out, said Joe Sternlieb of EastBanc. The design called for 70,000 square feet of rehearsal and office space, 64,000 of it below ground, and that would just not get built if Shakespeare cannot pay. The plans for retail, headquarters for International Relief & Development (IRD), the office/hotel space and  residential have not changed, Sternlieb said. Talking to Golding made it clear the team would welcome a hotel, but hasn’t made decisions or signed agreements yet for that component. There was talk that International Hotel’s boutique chain would be a tenant, but this has not been mentioned. Golding, who lives in Palisades, did say he would like to own a condo in the finished building once it is open.

“We are trying to buy them as much time as possible. We are continuing our discussion with the Shakespeare theater and we both hope that they can afford to come,” Sternlieb said. It is a, “custom built space just for them. If they didn’t come…we just wouldn’t build it.”

Stanton-EastBanc is in term sheet negotiations with IRD, a listed potential buyer of office space. They are also said to be in term sheet negotiations with an office condo purchaser, have letters of interest from two office tenants and have interviewed office brokers to lease the bulk of the remaining office space –- all prior to gaining site control, according to a letter to the Eastern Market Metro Community Association (EMMCA), cc’ing the Deputy Mayor’s office and Ward 6 Councilman Tommy Wells office written by John McGaw. The Stanton-Eastbanc team also has “had substantive conversations about proceeding with an additional three potential retail tenants,” McGaw wrote.

McGaw, a nearby resident of the site and member of EMMCA sought clarification from Sternlieb of EastBanc and rejected a resolution by EMMCA to delay disposition of the land until certain questions are answered about a sliver of land on the north part of the site that the city intends to sell to the developers, not lease.  McGaw’s dissent to EMMCA’s resolution can be read in this PDF document.

This parcel of land the city decided could be sold or leased, but Kaupp said the whole parcel will proceed as one project, whether that land is sold or leased.

EMMCA, which has about 100 members of nearby residents, is asking the City Council to not proceed on this disposition of the land until the city and the developers have answered questions about the project’s future viability given the notice on June 9th that the Mayor’s office said it would sell the slice of land on the northern part of the property (around where the C Street pass-though would be created).

“We might not win the fight to keep a school on the Hine site. The odds are against us. For that reason, our focus today is on the disposition of the property,” EMMCA member Tom Riehle wrote in prepared testimony for the Council.  Evidently, the city told parties that is impossible to build and sell condos under a ground lease, which EMCCA says contradicts other information. “EMMCA feels strongly, under the circumstances of this development and the current financial crisis, that selling a portion of the land would undercut the community’s ability to negotiate with this developer during the PUD process, and weaken the city’s ability to keep the development on schedule and on track,” Riehle wrote.

Since the north parcel will be almost entirely affordable housing, ownership is preferable for obtaining financing, argued McGaw, after talking with developers.

Kaupp says this won’t happen, and whoever gets the Hine site will get offered the sale of the land, and it will not be broken up.

Of course, the developers still have a swathe of contingencies before they close on the 99 year-lease for the Hine site and  the buy the parcel of land, and demolition isn’t expected for two years, according to Stanton. Contingencies include but are not limited to:  zoning, financing, construction drawing, various permits approvals, traffic studies, and the like. The Construction and Use Covenant to be recorded at closing requires that the developer break ground shortly after the closing. If the developer fails to break ground, there is a reversion provision that enables the District to retake ownership and possession of the site, noted McGaw.

“Factually, the deal is on course.  We have negotiated all required documents with the city to proceed once the Council approves…anyone who understands real estate development knows that the developer doesn’t control the finances or planning of third parties (like the Shakespeare Theatre) and we won’t be in a position to guarantee any specific user until after we have site control and they have executed leases or purchase agreements with us,” Sternlieb stated.

“We don’t  get this property until we meet all these contingencies,” Kaupp said.

“The plan as initially conceived -– housing, office, retail and parking – is still the plan we submitted to Council for its approval,” said Jose Sousa, project manager for the Deputy Mayor’s Office. “The team has consistently indicated that an office or hotel component is still part of the undefined commercial space they have proposed as part of their plan. It is not uncommon that at this stage in the development (prior to the planned unit development process) that the team would not have a commitment from a hotel operator or office occupant at this time.”

In the meantime, Community Action Group (CAG), formerly in the Old Naval Hospital, is using the Hine building. CAG assists with the homeless and  drug dependent and rehabilitated in the community. Moreover, I heard from Golding, but could not confirm on the Holiday weekend, that Artomatic might rent the Hine  space for its multimedia  art extravaganza event, as well.

Kaupp and Golding of Stanton urged community members to contact them with any questions. Their offices are right above Marvelous Market.

5 responses to “Hine UPDATE: TWF Exits Stage Left, but Curtain on Shakespeare not Down Yet”