Do You Care About Your Neighborhood? 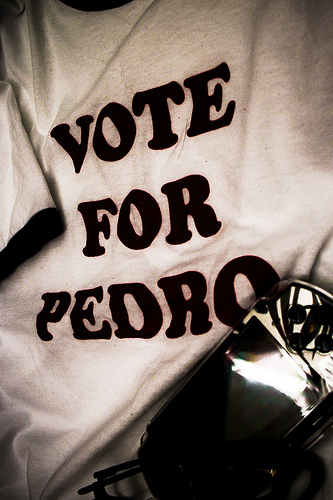 Do you have opinions about how things should be run around here?  Do you have 25 neighbors who think you have some good ideas about how to run things on your street?  Then maybe you should consider running for a spot on your ANC.

ANCs — Advisory Neighborhood Commissions — we remind you about the meetings every month.  It’s where you can voice your opinion about whether or not streets should be shut down for marathons, whether or not a restaurant should have its liquor license renewed, whether or not your neighbor should be able to build a deck on their roof…and much more.  As stated by dc.gov, “The ANCs’ main job is to be their neighborhood’s official voice in advising the District government on things that affect their neighborhoods. Although they are not required to follow the ANCs’ advice, District agencies are required to give the ANC’s recommendations ‘great weight.’ Moreover, District law says that agencies cannot take any action that will significantly affect a neighborhood unless they give the affected ANC 30 days’ advance notice. This includes zoning, streets, recreation, education, social services, sanitation, planning, safety, budget, and health services.  The ANCs also initiate recommendations for improving city services, conduct neighborhood improvement programs, and monitor resident complaints.”

The 37 ANCs in the city are each subdivided into a number of smaller areas called Single Member Districts (SMDs).   Each SMD, which consists of approximately 2,000 people, gets one SMD Commissioner to represent them on their ANC.  For example, ANC 6B has 11 SMDs, which means that ANC 6B has 11 Commissioners, each representing a chunk of the ANC, as seen in this map.  The biggest ANCs have 12 SMDs, while the smallest only have two.  So come election day, you vote for your SMD Commissioner, who is expected to represent you when decisions are made and keep you up to date on important neighborhood news.  To figure out which ANC and SMD you live in, put your address into the DC Citizen Atlas.

I recently read a post about ANCs on We Love DC, which highlighted the fact that few seats are ever challenged.  In 2008, there were 35 ANC seats on the ballot.  Of those, 24 were unopposed and 2 had no candidate.

I wasn’t surprised by the numbers but it did leave me feeling disappointed at how often a lame duck can hold that position.   Maybe people don’t know how easy it is to run, or think it’s too daunting a job.  Well, think again.  It may be a volunteer position that can be quite thankless.  But it is also a chance for you to actually make a difference in your neighborhood.  And, as I understand it, it’s not an unmanageable time commitment for the average person.

So do I have you thinking about it?  All you need to do is pick up a nomination petition on August 4th from the DC Board of Elections, get 25 of your neighbors in your SMD to sign it, and turn in your signatures by September 3rd.  And then on November 2, your name will be on the ballot!  You should probably also do some campaigning along the way as well, to let your neighbors know who you are and why they should vote for you.  And while you’re at it, send me an email (ClaudiaTheHillisHome at gmail dot com) with your name, the position you are running for, and your website so we can help spread the word about who is running for each seat in our soon-to-launch Capitol Hill Election Guide.

11 responses to “Do You Care About Your Neighborhood?”