During a hearing in 1962 Representative H. R. Gross asked a witness “You have heard that old saying, Mr. Macy, that there is nothing so permanent in Washington as something temporary, have you not?” It was hardly a new sentiment at the time; one reason why the temporary structures built during WWII were made to be as ugly as possible was to ensure they would, in fact, be torn down. One building which certainly proved the saying was the Temporary Capitol, built in 1814 and finally knocked down in 1935.

Over the jump, some more about this building.

On August 24, 1814, the British burned the Capitol, as well as a good portion of the rest of Washington DC. This led to calls for the capital to be moved further inland – Cincinnati was suggested – but a group of landowners, worried that the value of their property in the federal city would drop precipitously if that came to pass, chipped in to build a temporary Capitol across the street from the burned building.

The site chosen was that of Stelle’s Hotel, which had been a DC landmark since 1804, when Pontius D. Stelle bought it from William Tunnicliff. The hotel, which had hosted such events as a party thrown by Thomas Jefferson to celebrate the Louisiana Purchase, was torn down and replaced with a new brick building.

The temporary capitol was used on December 15, 1815 until 1825, during which time James Madison was inaugurated on its steps. This began the tradition of having presidents inaugurated outside (it is often written that this was the first time a president was inaugurated al fresco, however Washington had taken his oath of office on a balcony in 1789)

With the Capitol rebuilt, Congress moved back into its original digs, and the threat of moving the capital was banished. The temporary Capitol thereafter became first a private school, and later a boarding-house much used by congressmen. One famous resident was John C. Calhoun, who passed away in his room there in 1850. Shortly thereafter, the rooming house closed, and the building remained unused until the outbreak of the Civil War, at which point it became a federal jail.

As a federal prison, it was used to house prisoners considered a threat to the country: traitors, prisoners of war, and, above all, spies. Why keeping confederate spies and other such people across the street from the seat of government seemed a good idea at the time remains uncertain. Maybe it had something to do about ‘keeping your friends close and your enemies closer.’

The most macabre moment came on November 10, 1865, when Henry Wirz, the commander of the infamous Andersonville confederate prisoner of war camp, was executed on the grounds of the Old Capitol Prison, in sight of the Capitol. Other famous prisoners were the Lincoln conspirators Dr. Samuel Mudd and Mary Surratt, as well as several others who were charged in the assassination plot but were eventually exonerated. Surratt, who was held there immediately after her arrest, was later executed at the Arsenal 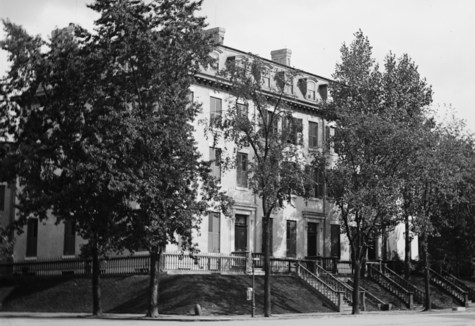 After the war, the temporary capitol went into a serious decline, and by 1867, a visitor to the city complained that it was being used as a henhouse. Shortly thereafter, the building was sold to George T. Brown. Brown, who was the Senate Sergeant at Arms, converted the building into three houses that were given the name “Trumbull’s Row.” The National Women’s Party (who now occupy the Sewall-Belmont House) used Trumbull’s Row as their headquarters until 1935, when it was torn down to make room for the Supreme Court.

Today, a plaque on the front of the Supreme Court is all that remains to memorialize this interesting – and long-lived – temporary building.